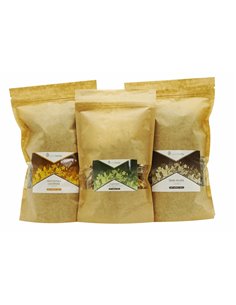 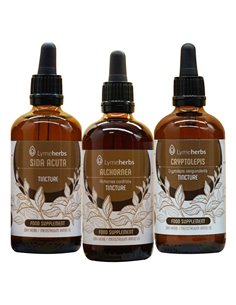 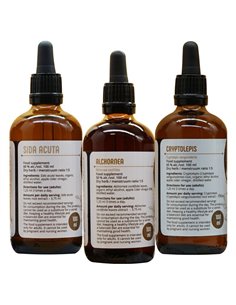 5 reviews
€43.06
Tinctures according to Stephen Buhner's Protocol for Babesia. 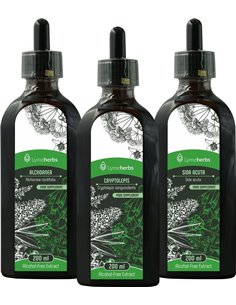 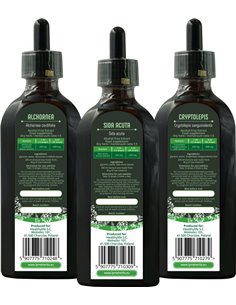 3 reviews
€70.16
Alcohol-Free Extract according to Stephen Buhner's Protocol for Babesia. 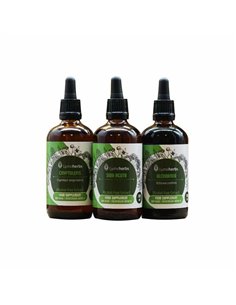 1 review
€70.16
Alcohol-Free Extracts according to Stephen Buhner's Protocol for Babesia. 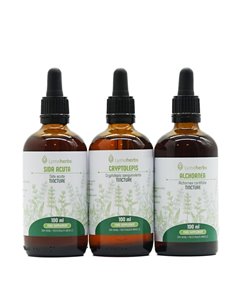 Babesia is a parasitic protozoan that resembles malaria but is transmitted by ticks. Babesia causes the disease known as Babesiosis (other names are Babesiosis, Babesiosis). Babesia infection often coexists with Lyme disease and / or other tick-borne infections. The symptoms of babesiosis infection range from mild to severe. Mild forms very often go unrecognized because they are mistakenly taken for symptoms of Lyme disease. Early adopters often report high fever and chills. Chronic infections may be mildly symptomatic, and the most common symptoms are: intermittent fever or low-grade fever, chills and joint pain, chronic fatigue syndrome, sweating, and "inability to take a full breath".

Co-infection with Lyme spirochetes exacerbates the symptoms of both diseases, then their course becomes more severe and the consequences for the body are more serious. Symptoms may then include severe headaches, haemolytic anemia, central nervous system involvement, high fever and convulsions. A synergistic, mutually enhancing effect of Borrelia and Babesia spirochetes on the body was found. Borrelia DNA occurs more clearly and lingers longer in the bloodstream when co-infection with Babesia occurs. Then the negative effects on the joints, heart and nervous system are more serious. In some cases of co-infections, transverse myelitis with paresis of the arms and legs was found. The development of the disease is more rapid from the beginning, the convalescence period is longer, and the spectrum of symptoms is much wider.

Many herbs are very effective in combating Babesia infections, to which the protozoan does not develop immunity. As in the case of Lyme disease, also in the case of Babesiosis, the antimicrobial effect is only one of the elements leading to an effective therapy.

In the treatment of Babesiosis, attention should be paid to the important mechanisms of action of Babesia which impede its treatment. Babesia natural herbal treatment takes into account each of the following aspects.

Like malaria embryos, Babesia penetrates red blood cells - erythrocytes, where, by developing and reproducing, it destroys them. In addition, in the course of Babesia infection, there may be blockage of capillary blood vessels and microcirculation stagnation due to the deposition of fragments of damaged erythrocytes in the vessels. Their presence in the bloodstream can cause inflammation of the liver, kidneys and spleen.

In the natural treatment of Babesiosis, the most commonly used herbs recommended by Buhner (listed on the official Buhner website buhnerhealinglyme.com) are: Alchornea cordifolia, Cryptolepis sanguinolenta, Sida acuta. These are herbs that exhibit a strong antiprotozoal effect and exhibit a systemic effect, i.e. they spread throughout the bloodstream, thus affecting every cell and organ. In addition, they strengthen the immune system, and Sida acuta protects the red blood cells. We recommend adding L-arginine to this protocol. Babesia is very sensitive to L-arginine, so supplementation with L-arginine helps to inhibit Babesia infection.  Buhner’s protocol for Babesia is one of the most popular natural treatments of Babesia infection.

With more resistant infections, it is worth using the more comprehensive protocol recommended in Buhner's book "Natural Treatments for Lyme Coinfections: Anaplasma, Babesia, and Ehrlichia". In this case, the amount of herbs and preparations used is much greater, namely: Cryptolepis, Bidens pilosa, Artemisina, Sida acuta, Salvia miltiorrhiza, Milk Thistle, Ashwagandha, Panax ginseng, Licorice, Schisandra, L-arginine, Vitamin B2. In this combination of herbs for Babesia, in addition to acting against Babesia, strengthening immunity, protecting erythrocytes and organs, you will also enhance the regulation of the cytokine cascade, protect the endothelium, inhibit the arginase production as well as increase in the level of L-arginine and nitric oxide (NO).

Herbs used in the natural treatment of Babesia will comprehensively affect many infection mechanisms. If you want to use herbal therapy to treat Babesia, remember to read the protocol proposed by Buhner, as well as its contraindications.